Who else has not watch Travis Scott McDonald’s meal that is turning the internet into burger place. You probably expects the Astroworld rapper with new album on Billboard though his newly launched meal looks like many lives are changing. Fans have been dropping perspectives about it meanwhile what exactly is happening some people asked lately.

Before giving part of the in-depth, why it is called Travis Scott McDonald’s meal is because the rapper teamed up with McDonald to provide fans with his favourite meal. Not exactly lifetime meal but a limited time attached while fans keep on enjoying as stated by McDonald company.

To Travis Scott, the favorite meal only cost him $6 with ingredients including a quarter pounder with cheese, bacon, lettuce, French fries with barbeque dipping sauce on the side, as well as a Sprite, as People told Amahiphop. Obviously the meal still ready to order till Oct. 4. 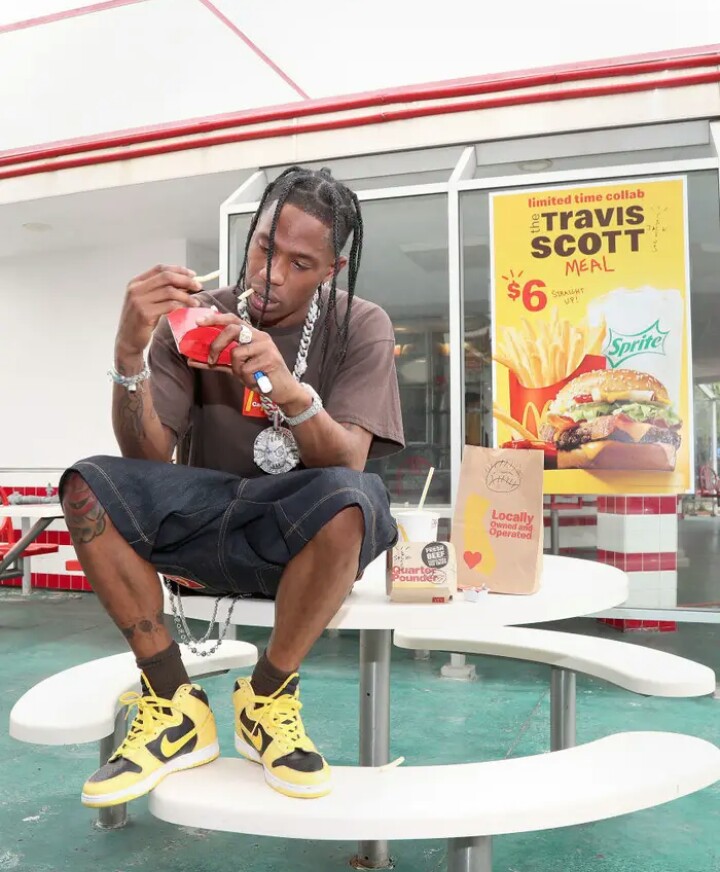 Source told told Amahiphop McDonald’s, since 1992 will be featured on Travis Scott future project. This is perfectly cool and both will go on charity program in the month.

McDonald and Travis Scott collaboration has gone a long way since the temporary inception. Love it or loath there is reseller and they have found something to sell. Following the release of Travis Scott’s linkup with McDonald’s, employee shirts with the Mickey D’s and Cactus Jack logos began to pop up on websites like eBay.

So that is it but having lauched the meal both as limited edition, many who have eaten the $6 Travis Scott are testifying how life has been since they ate it. Fans took to Twitter to address about the meal and it sicko mode which you can check below.

kid kept askin for the travis scott burgers so i went sicko mode on em pic.twitter.com/QArgFhWOQR

I ate a Travis Scott burger today so if I look more handsome from now on, that’s why

Make sure you’re in a safe place and have your spirit guide before eating a Travis Scott McDonalds Meal.

Imagine telling the drive thru speaker you want that Travis Scott meal and they respond with “it’s lit!” I’m driving through the restaurant

Dying laughing at the thought of a grown ass man pulling into McDonald’s and asking for the Travis Scott meal. 💀💀💀

My Travis Scott meal after waiting months for resell price to go up pic.twitter.com/jjN0n6g09s

You got her a quarter pounder with cheese, I got her a Travis Scott meal. We are not the same.

The McDonalds employee when they see someone pull up blasting highest in the room, knowing they’re about to order the Travis Scott Meal. 💀💀💀 pic.twitter.com/FYYHaViiLC

i will say that after eating travis scott mcdonald meal , i feel very energized. although i do fear that i may go sicko mode

Ima be like “let me get the Travis Scott meal” pic.twitter.com/WVkwJiEDoU

McDonalds workers having to make the travis scott meal for the 90th time today: pic.twitter.com/mY3t2OyKoP