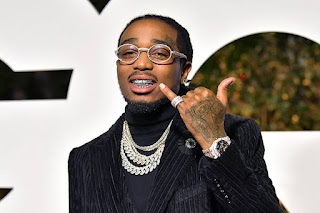 Sure everyone is expecting culture III this year, 2020. But the American trio rappers, Offset, Quavo and Takeoff has been busy doing some other independent side ventures while working on their architectural plans to bring third installment of Culture to light. Last year, Amahiphop Migos didn’t release and album probably because of Offset Father Of 4 though we compiled all songs featuring the Migos in 2019.

However, the group will definitely work on solo projects and Quavo who has been a notable fixture since this year is little bit doing wonders with COVID-19. Quavo has been getting external collaboration yet sent fans frenzy about his his new record label launching soon. Behind the rapper, he has assisted ton of singles which Intentions with Justin Bieber is so green not to get isn’t recognition on chart.


Amahiphop compile songs of artists who have gotten features both on guest appearance and own songs. Quavo without much attention, he got new songs on stream and today on Amahiphop compile all his songs of 2020 which will also get Updated on basis. Check out below.